Alas, the food at brunch was so hastily devoured that even the camera with the fastest digital shutter could not have captured it.

If you are ever in the Washington, DC area, the Tabard Inn is an impressive place to take either a date who likes delicious food or a stodgy gentleman who likes his atmosphere dripping with eau de wooden library and leather chairs.

This is a photo of the adorable reception desk, as The Tabard is actually an old-style publick house. 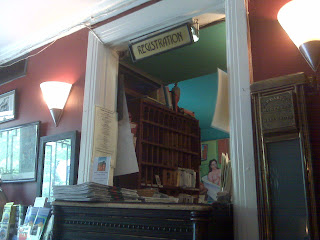 It has been alluded to in many books, though I imagine it's not quite as literary as the original Tabard! I'm told that the guest rooms are equally charming, but I have not seen them myself.

Then the food: we ordered the house special doughnuts for the table. Fresh, warm doughnuts with thick-whipped vanilla cream...covered in sugar...really, they were quite like the little beignets I had yesterday, sans lemon. The thing about these doughnuts is the freshness...if you didn't know that they were fried in the kitchen just moments before, you'd swear they floated down from heaven and happened to land on your plate. On Top Chef Las Vegas, Wolfgang Puck criticized a contestant's doughnut for being heavy, throwing it at the cameraman (or in that general direction). If he could have mustered up the cajones to throw a Tabard Inn doughnut, it would just fly away and keep on going. They are THAT GOOD.

Then I had the eggs Benedict with house-made Tasso ham. It came with potatoes and onions. Everyone else had the omelette, which I think had asparagus and goat cheese. Jim asked for Tobasco, as he is technically on shore leave from France and I'm pretty sure it's hard to get hot sauce in a restaurant there, even if you know how to ask for it. Anyway, I put some on my potatoes, even though they already had plenty of other flavors from the onions and whatever herbs they'd cooked them with. 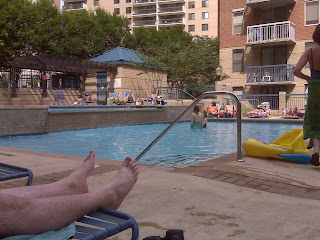 This other photo is of the pool at Jim's condo complex. After brunch, we went to hang out there, enjoying the unexpected sunshine. Also unexpected: the sheer number of babies we saw. Blair said that babies were the hippest new pool accessory, putting Jim's neon pool noodles to shame. This is, of course, patently untrue. Pool noodles are AWESOME.

I'm hoping to get a good GoodReads widget onto this blog so you can see what I'm reading (and maybe suggest more?). I just finished Junot Diaz's The Brief Wondrous Life of Oscar Wao, which is actually kind of about geekery. I didn't realize that until after I started reading it! I recommend it, but if you haven't read Watchmen or The Lord of the Rings, I suggest you get those out of the way first. A viewing of Star Wars and some basic Star Trek may also be in order, just so you don't feel totally left out of everything.

And that's that! Go outside and play...autumn will be here soon enough!

Posted by Melanie at 4:02 PM 2 comments: Links to this post

If your city doesn't do Restaurant Week, well, maybe it should. Restaurant Week is the way for poor young professionals on a budget (like yours truly) to eat a slice of the good life while not breaking the bank. Twice a year, local restaurants offer prix-fixe lunches and dinners that, in most cases, showcase the strengths of the restaurant. Not only does it drive up numbers for that week (or two, if the restaurant generously extends the RW menu), but if they leave a good impression, they can hope that it will increase business in the future (when you start dating a sugar daddy or someone's rich parents are visiting).

Thursday night, Pat and I went to Adour at the St. Regis Hotel, which I would highly recommend for the ambiance alone: they've somehow managed to refurbish and modernize this gorgeous old hotel without making an abomination of it. More specifically, they've added contemporary touches (furniture, light fixtures, and the glassed-in wine rooms) but the juxtaposition of old and new is only pleasantly jarring. Luckily, I would also recommend it highly on the merits of the food alone. It was probably the best Restaurant Week meal we've ever had.

Unfortunately for you, I didn't have the presence of mind to take photos then, so you'll have to trust me when I say that the food was lovingly cooked and painstakingly plated. Pat's ceviche appetizer was melt-in-your-mouth and topped with some tasty hot and spicy popcorn. I described my watermelon and tomato gazpacho as a "gateway gazpacho"...while I'm not the world's biggest gazpacho fan, this light, beautiful, spicy soup made me understand what all the hubbub was about. We both had the lamb, which was practically fork-tender and dripping with flavorful juices. My strawberry and vanilla vacherin looked and tasted like something I could have made (this is a compliment, for those of you who have not had the privilege of my cooking), but I was so happy that they had gone ahead and done it for me. That's why I go to restaurants! Pat's orange sachertorte looked difficult, even for me, and tasted amazing. They also pampered us with plenty of extras: warm mini-baguettes with perfect salted and unsalted French-style butters, four one-bite gougeres as an amuse-bouche, garlic hummus with crostini as a second amuse-bouche, and six mini-macarons with dessert! We felt loved.

Despite all evidence to the contrary, this post is about the Restaurant Week lunch I had on Friday. Pat really wanted to go to the West End Bistro because he's into the celebrity chef thing. (N.B., Adour is chef-owned by Alain Ducasse.) I picked up this reservation not knowing anything about it other than Pat's interest, thinking that he'd be accompanying me. He ended up having to work, so I got my friend Caroline to come with me.

Now, I am quite bright in many ways, but I will go ahead and tell you that I am mental-map challenged, and that I experience the directions-induced anxiety that comes with that. If I haven't been to a place on a regular basis, the chances that I will recall its location from an address or even a set of directions are slim to none. 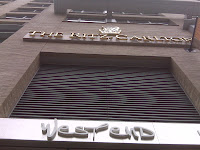 Imagine my surprise when I walked up on this restaurant today, in the pouring rain, and saw that it was smack-dab in the middle of the Ritz-Carlton! I'd been there before, eaten there, even (at another of their restaurants)! But I couldn't put the address with the place. Anyway, I was glad I hadn't worn a dress because of the rain, but when it turned out that I'd be having lunch at the Ritz, I kind of wished I was wearing a dress! Once I got over the initial shock of arriving at the Ritz in my pants and my soaking wet flats, I met Caroline at the bar and we took our seats.

The first thing they brought was bread, sliced, with a big pat of butter on a butter plate. The butter had a few beads of condensation on it, and it looked enough like the butter from last night that I went for it. Quelle surprise! This butter was much too salty! This made me worry about the rest of the meal. 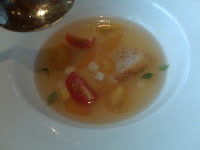 Fortunately, the tomato consomme allayed my fears. It was as though someone had taken bruschetta and made it into a light vinaigrette, and made that into a dish of tangy, cool soup, served with plain crostini. You can see the bit of crostini floating in my soup because it was the kind of thing that tasted like it oughtta be mopped up by a crouton. Also, I'd placed it on the side of the bowl for the photograph and it promptly slipped off into the soup.


The second course was pretty fantastic. Caroline got the fish burger with greens and some sort of thin aioli sauce. 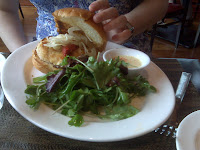 I got the potato gnocchi with asparagus, tomatoes, and supposedly some kind of cured meat in the sauce (but I couldn't taste that), with a duck egg on top. 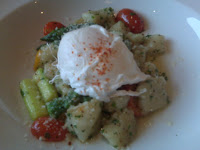 I don't think I've had a duck egg before. I didn't detect a difference between the duck egg and a chicken egg, except for the size. I don't think that poaching is necessarily the best cooking technique to bring out differences in flavor between different types of eggs, but I didn't mind that...it was delicious as a whole dish. I love eggs as dressing for salads, pasta, all sorts of things. 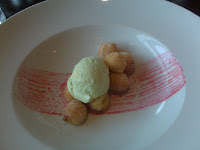 Anyway, then we had dessert, which was lemon beignets with basil ice cream. WOULD EAT AGAIN. I've never met anything made with basil that I didn't like. For that matter, I've never met anything made with lemon that I didn't like. A tart lemon substance had been injected into the little beignets, making them explode with bright lemony love when you bit down on them. They were also dusted with granulated sugar. The tart of the lemon brought out the best in the basil, all the sweetness and earthiness. In all, the dessert was heavenly.

It was an excellent lunch. There was a bit of a mishap with my glass of sparkling wine: I ordered it and had to remind the waiter after the first course was finished. Of course Restaurant Week is much busier than usual, so I will give them a pass for that. I don't suppose I ought to rate the restaurants I talk about here. I'm not interested in being rigorous about a rubric or doing any math, so if I gave a rating, it would likely be arbitrary. And I am nice, so it would probably also be inflated and not as useful as, say, Yelp, or other sites that do this sort of thing on purpose. 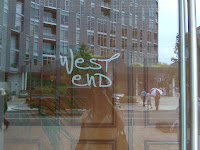 As for this blog, I think I've limited myself too much. I know the prevailing suggestion is to specialize...find a niche and blog the hell out of it, right? But my life isn't like that. If I have to write about just one thing, I get bored and run out of things to say. So, watch this space for something! I'm alive, and I'm trying to make time for everything, as usual!
Posted by Melanie at 11:30 PM 4 comments: Links to this post